“Down and Dirty Osteopathy”

“Down and Dirty Osteopathy”
Dr. Richard Chmielewski, DO, FACEP, NMM/OMM gave a lecture on the ins and outs of Osteopathy and Osteopathic Medicine, including various techniques used by the Doctor on a daily basis.

The Osteopathic Approach to the Flu Pandemic

The Osteopathic Approach to the Flu Pandemic
Dr. Richard Chmielewski, DO, FACEP, NMM/OMM lectured on the flu pandemic and the osteopathic approach to treating influenza through various techniques focused on circulation and the lymphatic system.

The Holistic Approach to Insomnia

Jessica Peeling was a 4th year medical student from UNECOM in Biddeford, Maine on rotation at the Falcon Clinic in Utica, NY.  She gave a presentation on “Insomnia” during a luncheon at the office.

The Holistic Approach to Insomnia
Her full paper is after the break.

END_OF_DOCUMENT_TOKEN_TO_BE_REPLACED

An Osteopathic Perspective on Headache

Rebecca J. Bowers, D.O., NMM/OMM Resident has written an insightful article on the headaches, titled “An Osteopathic Perspective on Headache: For the Patient.”  This article is for patients who would like to know more about how Osteopathic medicine can treat headaches and what techniques Osteopathic doctors might use.

Because of an Osteopathic physician’s medical and manual therapy education and training, they can provide not only a diagnosis for the headache, but a treatment plan that includes medication, lifestyle coaching, and using manual techniques to address musculoskeletal factors that can be causing mechanical stress to the body and contributing to head pain.

Read the entire article by clicking here: “An Osteopathic Perspective on Headache: For the Patient”.

The Falcon Clinic is pleased to announce that the article “Osteopathic manipulative treatment of pes anserine bursitis using the triple technique,” by Richard Chmielewski DO, MS, FACEP; Nicole Pena, OMS IV; and Gina Capalbo, OMS IV; was published in the March 2013 issue of the American Academy of Osteopathy Journal. The AAO Journal may be read online here. 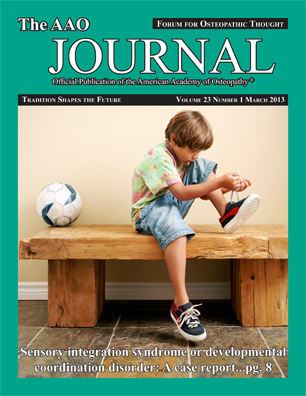 My Thoughts on a Unified Theory of Pain

As an osteopathic physician who, in years past was disabled with severe low back pain, and temporary disability, I read Dr. Sarno’s book with great personal interest.  As I read, I found myself agreeing with some of the premises he offered, and it reminded me of many of the teachings in Osteopathy. I was reminded of how Dr. Andrew Taylor Still, the founder of osteopathic medicine, formulated a philosophy and practice of medicine that he hoped would better unify our perspectives on health and disease, not unlike Dr. Sarno. By remaining complacent in our present view of contemporary medicine, we risk ignoring wonderful opportunities to better treat disease and pain.

Dr. Andrew Taylor Still was a very pragmatic individual who severely criticized the medicine, surgery and obstetrics of his day. He felt that patients would be better off if they stayed away from the medical doctors of the time, and might even live longer, healthier lives. The mainstays of treatment in the mid- and late-nineteenth century were often morphine, opium (and later heroin), alcohol, and mercury. He rightfully felt that these treatments gave rise to sickness, addiction, and sometimes death. He was a leader and proponent of more natural forms of health and healing. He supported public health and personal hygiene, healthy eating habits, and exercise. He felt that the psychological and spiritual well being of the individual were of supreme importance in maintaining health, and must be addressed as part of appropriate, osteopathic treatment.

In addition, he believed firmly that the body had the ability to heal itself, and rational treatment of any disease needed to address the structure of the body, and to normalize it by physical means to aide in restoration of normal function. This might mean restoring normal movement of the ribs, stimulation or quieting of the activity of the vagus nerve in the neck, or of the sympathetic nervous system in the upper thoracic spine. It could include restoring proper tonicity and movement of the diaphragm, and drainage of lymphatic fluids from areas of swelling and inflammation. One of the main tenets of Osteopathy, expounded by Dr. Still is that “the rule of the artery reigns supreme.” Simply put, if circulation was impeded, especially at the microcirculation level, or through a sluggish lymphatic system, or cerebrospinal fluid system in the brain and spinal cord and nerves, then putrefaction, or a tendency to disease, pain and infection would ensue.

These are principles that are well accepted today within the medical profession by anyone who has studied physiology. Here are two tests of the validity of the rule: tie a rubber band tightly around a finger, shutting off the blood supply. Leave it on for two weeks and see what happens. Or, clench your fist tightly, squeezing all of the blood out, blanching your fingers. Return in two weeks, keeping the fingers tight until then. Now, try to open the hand. See how difficult it is to straighten the fingers? …Quite stiff and painful, aren’t they?

Let us now return to Dr. Sarno and his theory of TMS: the role of the autonomic nervous system and the importance of repressed emotions causes pain and disease. Structure and function to an osteopathic physician normally means addressing some somatic dysfunction such as found in a forearm, or knee or foot or neck. But it can also mean poor nutrition, and even a poor structuring of a person’s reaction to events in their life. It was no accident that, in the early years of Osteopathy’s development, there was a psychiatric hospital at Kirksville, Missouri where Dr. Still founded his first American School of Osteopathy and Infirmary. I am sure that most osteopathic physicians would embrace the concept that mind and body are intimately intertwined and inseparable. The thesis that there is usually an aberration in the microcirculation of a somatic, or even visceral, problem, again would be met with agreement by the osteopathic professionals. And the thesis that emotional support, treatment and possibly even psychotherapy would be beneficial to any treatment of chronic pain would probably be greeted without much, if any, resistance.

I think the main area of concern or of disagreement might lie in the idea of what causes disease and pain. Osteopathic medicine today embraces the many advances in medicine and surgery since the infancy of Osteopathy in the late nineteenth century. As a profession, we embrace the Cartesian mechanistic view of the body, to help us in our desire to heal our suffering patients. It is from that perspective that we approach alterations in the body’s structure: is there swelling, is there limitation of motion, is there change in tissue texture, is there an alteration of circulation or neurotrophic effects in the area in question? As a result, we will remove a diseased appendix. We will give intravenous infusions of electrolyte solutions and antibiotics to treat overwhelming infections. We will utilize radiation and chemotherapy to treat cancers. Yet, being wholistic practitioners (the “w” is intentionally added), we do accept that mind and body are connected (unless separated by guillotine) without question, that there can be, and usually is, an overwhelming influence of emotions and spirit on a person’s perception of pain and disability, both acute and chronic. For that reason, osteopathic physicians since the beginning have been noted for their ability to talk with, to educate, and to emotionally and psychologically support patients in their times of need.

If there are any new lessons for an osteopathic physician (or any other health care professional for that matter) to learn, I feel it is that we should question how much we rely on routines or “cook book” protocols of care for our patients, and how much do we rely on medications instead of relying on the body’s inherent ability to heal itself? How much time do we spend with our patients to find out what is truly the problem. Can we, in fact, intervene successfully by having the patient bring out their repressed feelings?

Possibly. In order to do that however, I feel that we have to be prepared for what else comes out with that catharsis, or outpouring of emotions. Even Freud cautioned on this approach. It is often not enough to let a patient relive or bring out certain feelings. There has to be a process, and a resolution. Patients have to come to terms with their guilt, their fears, and their anger. Without taking necessary steps to recovery of these feelings along the way, there could be unpredictable outcomes, development of other symptoms, emotional instability, or in the most tragic cases, suicide. Osteopathy works in sincerity to achieve health through natural, pro-active means, honoring the mind and body connection, and seeing each person as the sum of their many parts. With this approach, we hope, as a profession, to help those in pain.